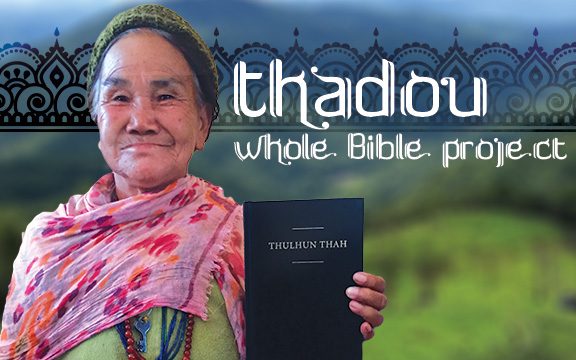 Thank you to all who partnered with us on this firstBible project. With the funds we received, we were able to print 11,000 Bibles and 20,000 New Testaments. Praise the Lord! This container was shipped this spring and was received in November. On December 6 th , a dedication service will be held and the distribution of this Bible will begin. After many long years of labor, the Thadou people have finally received their first Bible! This could not have happened without you. Thank you again for investing in the Thadou Bible Project!

Thadou is one of the recognized tribes in the Indian government and is the second largest tribal community in Manipur state. The Thadou have maintained distinct traditions, culture, customs, and their own spoken language down through the centuries. According to the 2011 census, the total Thadou population in Manipur was 1,090,595. They are also found in other states such as Assam, Nagaland, Mizoram and the neighboring countries of Myanmar and Bangladesh. The entire population of the Thadous in this region is estimated to be more than 350,000. The Thadou language is also the second spoken language in the Manipur state of the Indian Union. During the British period, the Thadou dialect was prerequisite for any government employee. The first Baptist missionary of Manipur, William Pettigrew, who came from the Arthington Mission Society in Great Britain in 1894 and who later joined the American Baptist Mission Society, learned and spoke the Thadou dialect.

It is pertinent to note that because the Thadous do not have the whole Bible to read carefully, their understanding and knowledge of the Bible is shallow, hollow and superficial. consequently, their faith becomes shaky, unsteady and wavering. Furthermore, the churches are not rooted or grounded in the body of Christ. A number of contributing factors would include: an imperfect knowledge of the Word of God, a lack of constant study and reading of the Bible, and a lack of profound meaning or understanding of the true meaning of the Word of God. Therefore, churches have become lukewarm, indifferent and worldly. Many of the churches have become lifeless and living dead. They are far from “missionary” zeal and approach; their evangelistic work has become ineffective, dry and powerless. The main reason for this miserable failure in the program of evangelization can only be attributed to the non-availability of the Bible. Hence, to have the Bible is the cry of the Thadou Christians.

firstBible International is a ministry of the First Baptist Church of Milford, OH